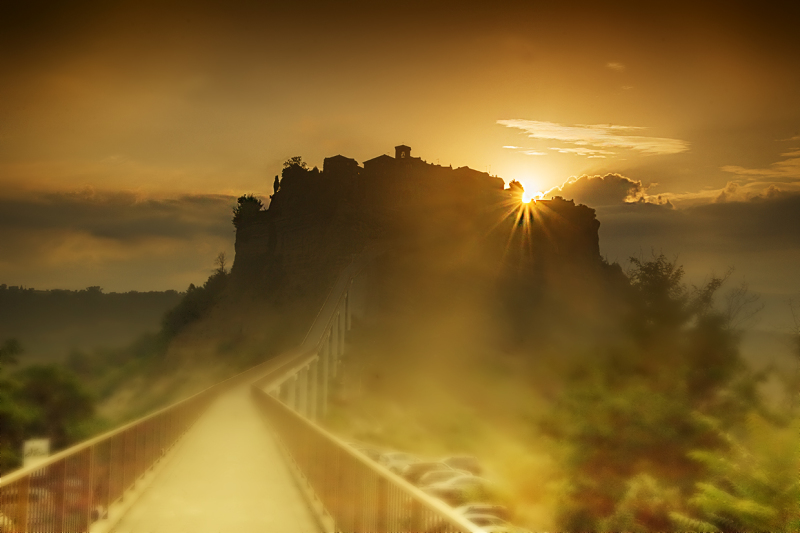 Posted by Nazzareno (Rome, Italy) on 31 July 2018 in Landscape & Rural and Portfolio.

Civita was founded by Etruscans more than 2,500 years ago. Civita was the birthplace of Saint Bonaventure, who died in 1274. The location of his boyhood house has long since fallen off the edge of the cliff. By the 16th century, Civita was beginning to decline, becoming eclipsed by its former suburb Bagnoregio.

At the end of the 17th century, the bishop and the municipal government were forced to move to Bagnoregio because of a major earthquake that accelerated the old town's decline. At that time, the area was part of the Papal States. In the 19th century, Civita's location was turning into an island and the pace of the erosion quickened as the layer of clay below the stone was reached in the area where today's bridge is situated. Bagnoregio continues as a small but prosperous town, while Civita became known in Italian as La città che muore ("The Dying Town"). Civita has only recently been experiencing a tourist revival. (Wikipedia)

What a powerful image . . and gripping dialogue, too !

A magical image of this beautiful place. It's good to see it before it's gone.

Absolutely beautiful. This is just so magical. A gorgeous image and very interesting history. 5*

Congratulations on the well deserved Spotlight!

Wonderful !! Congratulations on your Spotlight !

Back to congratulate you on the well-deserved Spotlight!!

CONGRATULATIONS ON YOUR SPOTLIGHT!